This year will undoubtedly go down in family lore as "The Year We Had the Chickenpox on Easter."

Except we didn't *exactly* have it on Easter. Deux had pretty much scabbed over by Easter, and Duchess didn't come down sick until Tuesday. 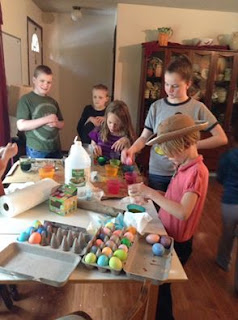 Still, chickenpox has loomed over all the festivities, keeping us out of general gatherings, and keeping away everyone except those confident in their immunity or desiring to acquire some. (I did let asymptomatic kids go to the sunrise service--I figured outside they could adequately avoid everyone else.)

We did manage to dye eggs with friends (who were hoping to catch it) and have a reduced family gathering on Easter. It hasn't been entirely without festivities.

So far Dot and Dash have not had any definitive symptoms. Duchess is in the throes of misery as the eldest sufferer. Deux endured the whole thing with relentless stoicism and a whole lot of Alphabears on the iPad. (His verdict: having chicken pox was not worth the extra iPad time.) Where Deux acquired them in the first place I cannot imagine, as he does not exactly vigorously seek new acquaintance and I haven't heard of anybody we actually know having them.

I have laid in a stock of movies and now am just hoping for everyone to get it quickly and be done.
Posted by Queen of Carrots at 8:58 PM 2 comments:

I promised myself that I would *never* do this, but I did. I couldn't stop myself. The twins were complaining, yet again, about the fact that they were expected to work on the exact same math page at the same time, not to mention having to write down some of the answers instead of doing it all orally.

Finally, I blurted out, "You know, in regular school, the kids all have to do the same math page. Twenty or thirty of them."

"OK, technically not, but copies of the same page. And they have to write in all the answers by themselves."

Dash: "I never, ever want to go to regular school."
Posted by Queen of Carrots at 5:53 PM 1 comment:

The last couple of weeks we had a round of nasty colds go through (I think there were at least two separate viruses swapping back and forth).

So last Sunday I took the time to just sit on the couch and Be Sick all day. Except for about fifteen minutes of standing up and chopping long enough to get this chicken soup cooking. This chicken soup contains pretty much everything I've ever heard of being useful against a cold, and if you're not into healing properties of foods it's just an incredibly easy and delicious soup, with none of that grandiose roast this and blend that nonsense that people keep cluttering up honest, simple soup recipes with. Between the soup and the resting, I was back to functional by Monday. All amounts are wildly approximate.

Sautee in the bottom of a large pot.

Cook until the veggies are soft, about twenty minutes. Add 2 cups frozen broccoli and the juice of one lemon; let it all get hot again and serve.
Posted by Queen of Carrots at 5:10 PM No comments:

Email ThisBlogThis!Share to TwitterShare to FacebookShare to Pinterest
Labels: food

The Long Mars, by Terry Pratchett and Stephen Baxter. Mostly enjoyable as a final (I assume) book in the series. I did find myself a bit annoyed by the depiction of the "Next," though. Why is it that when we imagine the new, improved humans they're always much smarter than us but also arrogant, entitled jerks? Why can't the human of the future be kinder, humbler, more empathetic? Maybe there's something to Original Sin after all.

The Westing Game, by Ellen Raskin. Duchess recommended this after reading it for the library's book club. Surprisingly dark (not in an overwhelming evil way, just in the little pettinesses and life struggles) for a children's book from its era, but not, I suppose, for a mystery. I saw much of the solution in advance, so at least I scored there.

I Know Why the Caged Bird Sings by Maya Angelou. Beautiful and heartbreaking and sometimes hilarious. I especially admire her ability to convey the feelings and perspective of a child, something hard to reconstruct after the years. And her insight into the ugliness that can build in victims. A very real book.

True Justice by Robert Tanenbaum. His Majesty left this at my house and suggested I might try it. I picked it up skeptically as legal thriller is definitely not a genre I usually enjoy. However, I enjoyed it in spite of myself; the characters were surprisingly relatable despite the vast differences between the fictional life of criminal attorneys in New York City and the real life of estate attorneys in rural Washington. And the legal and ethical issues raised were worth pondering.

A Duty to the Dead, by Charles Todd. This was the current pick for the church book club; someone thought we needed a more cheerful read, so we did a murder mystery. (Well, murder mysteries are rather cheerful books on the whole. At least the ones where we find out whodunnit and they get caught.) It was a good read. Spoiler: a rather disturbing conjunction between this one and the previous was that in both a cold-blooded serial killer turned out to be a ten year old boy. I checked with Deux, but he has no plans to kill anything but zombies.

Paradise Lost, Books IV-VI. Still reading this along with an online group. Much more fun this way, but I'm falling behind and need to catch up.

Fablehaven series by Brandon Mull: In Duchess's estimation, if I cannot still instantly recall all characters and plot points in a series of books for discussion, then I need to read it again. So I read it again. It was a good way to spend a weekend with a cold. I think Mull is going to prove to be one of those prolific authors whose writing improves as he goes along. His inventiveness is amazing. The writing is not eloquent but not awkward; just a lot of fun to read. A little preachy in spots, but not really in a bad way.

In Process:
Hell's Foundations Quiver, by David Weber: Honestly, I'm not sure why I'm still reading this series. The first few were very enjoyable, with their depiction of a world deliberately kept in technological ignorance for its own safety by means of religious control, and the attempt to disentangle truth from mind control. However, at this point the world-building and global war have gotten way too cumbersome for my tastes. When we're learning the fabric content of the polar army's long underwear, it's just too much. However, I haven't quite let go yet.

Longitude, by Dava Sobel: I finally caved in to being middle-aged and got a large purse. This means I can now keep a book with me to read instead of reading three-year-old Good Housekeepings in waiting rooms. This is that book, which I found at the library sale shelf. Navigation, shipwrecks, and politics. Promises to be awesome.

Oliver Twist, by Charles Dickens: The big kids are reading this for school and I realized I needed a refresher on this to adequately discuss it with them. Dickens is rather opaque--this book is definitely a stretch for them, but seems to be rewarding the effort.

As a family, we finished up Five Children and It and are reading The Phoenix and the Carpet. I tried reading the latter to the children when they were much younger and thought the scene where the phoenix insists on receiving his due homage at the fire insurance office was the funniest thing ever, but of course they could not fathom it at all at the time. This time they got it and also thought it hilarious, and composed their own ode to the Phoenix.

We're also reading Hiawatha. All of it. I don't think any of them realized a poem could go on that long.