You will pry summer out of my cold, dead fingernails.

I don't care that the back-to-school sales are over.

I don't care that the temperature is barely getting out of the sixties.

I can't hear you.

It's the best part of summertime, when the night start coming earlier and the kids can go out on the porch after dark and make wishes. When the tomatoes overload the vines and the first apples come in and peaches are so cheap it's embarrassing.

Soon the beaches will clear and the classrooms will fill and everybody else will be breaking in new shoes and twills but we will still be wearing ragged cut-offs and crocs and squeezing the last bit of juice out of the last few days.

I like fall, too, though it always makes me sad. It has its time. But there are still three full weeks of summer to go, and I intend to make the most of them.
Posted by Queen of Carrots at 8:55 PM 4 comments:

This Week in Short Spurts

Made zucchini fritters. They were tasty.

The big kids decided they wanted to earn money and swept and mopped the floor (not quite as well as I would have done) and folded the laundry (much better than I would have done. I have no idea where Duchess learned to fold like that). Then they lost interest in earning money for awhile. Every once in awhile I debate the merits of encouraging them to be greedier. (Yes, they do have regular chores they do without money.)

While the big kids were mopping the floor, the twins picked blackberries. And came in with their hands full of blackberries and no way to reach any dishes. Dash finally smeared them against his shirt.

Was very tired on Friday.

The big kids went with Their Majesties and Bookworm to the county fair. They had a marvelous time and came back with quaint little calico stuffed animals (cat for Duchess, seahorse for Deux) and ping pong ball eyeballs.

Saw a teenager scaring seagulls off at the park. The children were  horrified. Later in the week, walked with the twins past a spot where litter is often seen. Dash remarked, "What person puts garbage on the ground? Maybe someone who scares birds!" Perhaps I'm not raising them to be complete hooligans. Or perhaps I'm just raising them to be judgmental snobs. Actually I think all children are born that way.

Toolboy led a crew of other family members in erecting our monster, scary, huge playset that we disassembled and brought here a month or so ago. Now it is up and it is big and the ducklings are having a blast with it. It's still missing a few key things, like long enough chains for the swings and boards to replace the rotten ones on the deck, but as far as the ducklings are concerned, it's an optimal pirate ship/play house/rocket/whatever.

In learning to play role-playing games, killed a giant Venus flytrap and two manticores. This was an improvement from last week, when it took us all night to kill one giant porcupine.

Left my cell phone and house keys next to my purse instead of in it, which resulted in them bouncing off the car as we left the driveway. The phone was found by a jogger, who returned it, and the keys were still lying where they fell.
Posted by Queen of Carrots at 5:47 PM 2 comments:

Every family with children reaches this stage at some point.


Waiter, what's this fly doing in my soup?
Learning to swim, sir.

They have found where the library files them and they check them out in stacks. Deux is the prime proponent, but the others participate. They keep them in cars and read them off to each other as we drive, reciting them like a litany of humor:


Why did the elephant paint its toenails red?
So it could hide in the cherry tree.

The twins are technically too young for this stage, but they participate in it just as eagerly as the big kids. Whether they actually get the jokes or not is impossible to tell. They have them all memorized, anyway.


Six copycats were in a car and one got out. How many were left in the car?
None, they were copycats!


I remember when my younger siblings found the Bennet Cerf Book of Riddles and read and repeated them as if they were a new discovery of mankind. And in my adolescent superiority I rolled my eyes. Those old things. I knew them all when I was eight.

Doctor, doctor, when will my measles get better?
I don't know, I don't like to make rash predictions.


Ah, but they are new. The universe is reborn 490,000 times every day. And somewhere, every day, a child picks up a joke book for the first time and "gets" their first pun.


What time is it when you go to the dentist?
Two thirty!

What I do with my summer vacation 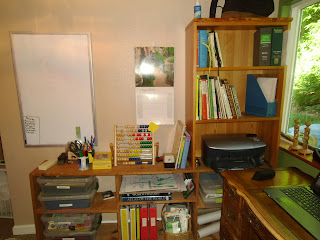 Bookworm is somewhat at loose ends until college starts in the fall, so she offered to come over and help me with organizational things. I organize much better if there is another adult person in the house, ready to tell me, "Yes, throw it away!" (unlike the children who inevitably think of thirty new uses for it.) Also, Bookworm is an engineer, and therefore was able to figure out how to combine two old, odd-shaped bookcases into one bookcase the right shape for the space--and also how to stabilize it so it would not fall over. This involved using my hand saw and the end of  a board we found lying around and the edge of the porch and my foot. (I used my bad foot so if it got injured things would not be significantly worse.) So, now I have--at no extra cost--a school shelf that is actually deep enough to hold school-type materials, which makes me very, very happy. 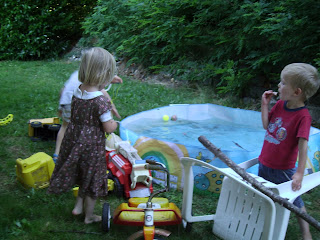 In the meantime, the kids were busy with the pool, specifically with filling the entire pool with dirt, rocks, and bicycles.  They like to do that kind of thing.