A long time ago, when I was at that stage which is more or less legally an adult but mostly as a matter of technicality, I worked at a quite marvelous place with some people who were really, truly, most definitely adults. From time to time they would shake their heads and say things like, "You are *so* young," and at others they would mention the joys of being on the *right* side of five-and-thirty, and then they would launch into such pearls of wisdom as can only be attained with advancing age.

Well, now I am on the right side of five and thirty, though they would probably now announce that fifty is the age at which true wisdom is known. Nonetheless, I think I've attained a measure of maturity, such that people never marvel at my youth anymore. I can find gray hairs and wrinkles, if I look closely, so I don't look closely.

I was going to write a blog post up with thirty-five things I have learned in life, but I couldn't come up with that many. Make of it what you will. Mostly, I think I have learned what I don't know. And that is a list that would not stop at thirty-five items.
Posted by Queen of Carrots at 12:27 PM 5 comments:

Email ThisBlogThis!Share to TwitterShare to FacebookShare to Pinterest
Labels: birthdays

A couple of weeks ago, I was so tired that I ordered pizza.

That probably doesn't sound blogworthy, but you would have to understand how bad things have to be before I order pizza. I feel about ordering pizza as a pacifist president feels about pushing the red button. It's just not on my list of Things I Might Do. There's the agony of knowing how much it costs compared to pretty much anything that could be made at home; there's the dubious nutritional value; and then there's the fact that the kind of pizzas you can get delivered to your door just don't taste all that good. (On very special occasions we have been known to get the Papa Murphy's take and bake, which do taste good, at least. Only with a coupon, though.) Also, formerly, there was the challenge of composing my thoughts on the phone, which, if I am tired enough to be ordering pizza, I am definitely too tired to be doing.

Anyway, the pizza places have taken away that last objection by online ordering, and even when I am too tired to speak, I can usually still point and click. So I ordered it, and luckily DOB woke up in time to answer the door, because even walking that far was out of the question at that point.

But I have since been devoting myself to the project of Not Needing to Order Pizza. Wondergirl and His Majesty kindly saw to it that the chest freezer finally got moved from my grandparents' garage to the shed, and I am stocking it with cooked hamburger and grated cheese, and yes, hot dogs. Even hot dogs are cheaper and healthier than pizza, and the Duchess can cook them, although the freezer is not yet full enough for me to trust any child to go fetch things from it without falling in.

Shortly thereafter I was reading an online discussion on simplifying life, something I always fantasize about. And then the toaster broke. On the one hand, life might be visually simpler with one less thing on the counter. On the other hand, I kept burning the toast under the broiler and the kids couldn't make toast unsupervised any more and bread and butter was out of the question because the house is too cold for pliable butter.

So, I had DOB get me a new toaster. And I snagged one of the pancake griddles from Grandpa's house, which, although it will be difficult to store, makes a family-sized meal of french toast in ten minutes. And that's what I call simple.
Posted by Queen of Carrots at 4:43 PM No comments:

On Ends, Means and Obedience

A certain article by John Piper on obedience popped up in my Facebook feed a lot last week (or two . . . I have never caught up with the pace of internet discussions.) Apparently it struck a chord.

The truth is, death is highly unlikely in either scenario, so let's set that aside and look at reasonable risks. Similarly, disobedience might, in some circumstances, lead to death, but so might unquestioning obedience. ("Theirs not to question why, theirs but to do and die.") In any case, cooperating with people pointing big guns at you or with people about to take you six miles into the air are both more matters of self-preservation than obedience. Forget obedience, I hope I can raise my children not to be stupid.

But the real problem I have with the article is its open twisting of Scripture. No, the Bible does not say, "Parents, make your children obey you." It never, ever does. And John Piper of all people should know better than to put things into the Bible that aren't there. It doesn't matter that it doesn't make sense to him that God would tell children to obey and not tell parents to make them obey: God is perfectly capable of saying exactly what He means. God also never says, "Wives, make your husbands love you," or "Masters, see that your slaves obey cheerfully, as unto the Lord."

Now, if I don't believe that God tells me to force my children to obey, does that mean I sit back idly and let them do whatever occurs to them, however wrong or dangerous? Of course not. If it was my small boy playing with an electronic device on the plane, and they didn't turn it off, it would be spending the rest of the flight in my purse. (And then, if it WAS one of my small boys, we would have a long and vivid discussion of the possible consequences of interference with radio transmissions, and all the people within earshot would be traumatized for life.)

So if the end result is the same, why do I bother to differ? Because I think it makes a difference where you start from. Piper's article, and many articles and books on the same thing, makes it sound like the beginning and end of parenting is authority--that our purpose as parents is to exercise our authority so that our children will learn to submit to authority because authority is the Way Things Ought To Be.

But authority is a means, not the end. The end and beginning and summation of all things is love. God is love. God is not "authority." (He is the King, but note that a king is a person. Someone we can love.) The whole point of the change from the Old to the New is that obedience out of coercion was no good at all. We need a new heart, and then we obey out of our new heart, because we love Christ and pick up his mannerisms. Authority as a parent is not an end goal, but something given to us to serve our children in teaching them to be an independent adult and modeling for them how to be a follower of Christ.


Even if the issue is exactly the same, it makes a big difference whether the reason for making a child obey is, "They are the child, I am the parent, and I must make them obey," or "It's my job to help them grow in this area." It's important to remember that parents are sinners, too. And too much harping on our own authority is a dangerous temptation. It's very easy to slide over . . . I have done it many times myself . . . into "You should not DARE to challenge me," or "How can I make you hurt enough to stop this?" And neither of those attitudes are Christlike at all.

In a practical example, suppose a child is told to pick up their toys and doesn't want to. Looking at this through the lens of authority, this can only be interpreted one way: Disobedience. Challenge to authority. Child must be coerced into obedience so that authority is not disrupted. There might be various ways the coercion is applied, but there must be no doubt about the coercive force. Any approach that might distract from authority (making a game of it, using an incentive) is suspect if not outright forbidden.

However, if I'm looking at it simply with the goal of helping my child grow up, I realize that the child probably isn't thinking about my authority one way or another---they just don't want to pick up their toys, something I identify with very much. (By the way, I have been amazed as a parent how seldom, if ever, my children actually challenge my authority if I don't bother to assert it for its own sake. It's been a complete non-issue.) My job is not to bend them to my will, particularly, but to help them learn to overcome that natural reluctance because it's an essential life skill to do stuff you don't want to do and to take care of your own things. Now games and incentives, or just doing it alongside them, are back on the table, because those are all great strategies for learning to do stuff you don't want to do. Even if you do a consequence that might look like punishment (like removing toys that aren't cared for), it can be done, not as the authority setting yourself in opposition to the child, but as a sympathetic guide helping them streamline their life.

After all, obedience to earthly authority is not the sum total of righteousness. Quite the opposite. One of the other things I want to teach my children is that there is a time to disobey. That someday they may need to stand with William Tell and John Adams and Christ's own apostles and say, "This is an unlawful use of authority and I will not obey."
Posted by Queen of Carrots at 7:42 AM 8 comments:

I am in a fair way to beat out 2011 for Year with Fewest Blog Posts. But I'll try to make it a close contest. I can at least manage a picture. 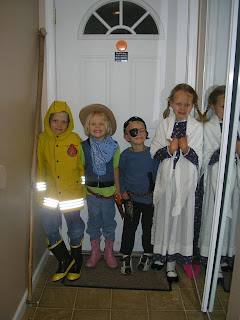 Costumes: Fireman, Cowgirl, Pirate, and Pioneer Girl. We even managed to go trick-or-treating this year, causing the kids to dub it the best Halloween ever, since the last time we managed that the twins were babies.

And then they picked out our favorite kinds of candies and gave out of their bounty. There's nothing like a free peanut butter cup to make you feel like you're doing something right.

Earlier in the week, I portrayed Katy Luther at church for Reformation Sunday. With some coaching from Her Majesty, I managed to convince everybody that I actually knew how to speak German, even though it was my first attempt ever. (Mostly I followed the classic advice, "If you don't know how to say a word, say it loud!")
Posted by Queen of Carrots at 8:19 PM 2 comments: