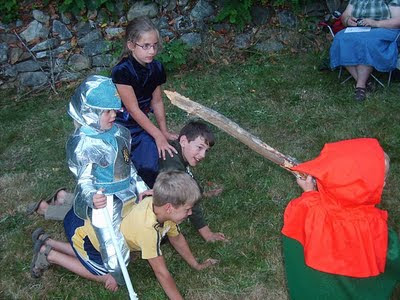 Now that the rest of the country is starting to look for summer to be over, we are finally seeing the first signs of it. It's OK, my desired length of summer is two weeks. I'm ready for fall now.

Nonetheless, we have been enjoying what summer we can: filling and then emptying the wading pool, picking blackberries (the fruits of neglect), and lying around in the shade wishing it was over.

This week the Duchess finally got to see the completion of a project she began last winter: the ducklings and their cousins of sufficient age to brandish sticks put on a production of "Robin Hood." In the picture, Deux as a disguised Robin Hood challenges the Duchess as a disguised Maid Marian, accompanied by her maid and two horses. The cousins were genial about certain casting inequalities, but they have plans for writing their own play next.

In a way, this is the first end of summer for us, as I am at last making plans for really, truly doing formal lessons this year. ("Formal" meaning: You have to do this whether you want to or not.) Not very much, and I expect it all to still be quite fascinating. If I have the audacity to tell children that my ideas are more important than the projects they already have underway, I ought to make it worth their while.

Why I will never be a gym rat 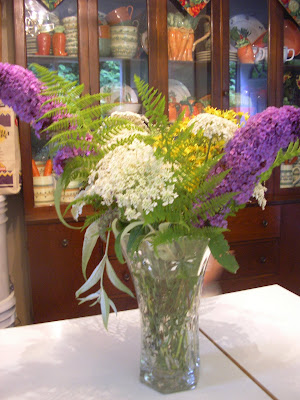 I got this on my morning ramble. I'd rather have that than abs of steel any day.

Learning to draw, for the oldest two ducklings, was a massive trauma that overshadowed most of their preschool years. Duchess was the worst. We had approximately 1,375 conversations that went like this:

Duchess: Draw me a girl.
QOC: Why don't you draw a girl? I like to see your drawings.
Duchess: NOOOOOOOOOO!!!!!! I don't know HOW to draw a girl.
QOC: The way you learn to draw is by trying to draw. You won't learn if you don't try.
Duchess:
Posted by Queen of Carrots at 12:48 PM No comments:

1. DOB's parents were here for two weeks. Toolboy loaned us his fifth wheel for them to stay in, which worked out well for everyone, including Toolboy who has now installed a proper septic hookup for parking the fifth wheel. He does things like that, while I am still trying to figure out how to get my bulletin boards to stay on the wall. The ducklings were very sad when we finished filling back in the dirt piles from the pipes.

We all had a lovely visit, and we went to the zoo and to the park and spent a lot of time just hanging around the house, which still needs a lot of hanging.

2. Our church has done its VBS as a series of Wednesday-night events for everybody in the church and including a potluck supper. This has been pretty fun and it's nice to have the whole church involved (and a big draw for me to only have to fix one dish instead of a whole supper). It has the big disadvantage of people taking vacations right in the middle, so the mix of people doing stuff changes every week.

3. Wondergirl and I started work on the basement this week. I had the babysitter come and watch the kids all day while we burrowed in. It took us until 4:30 in the afternoon to find the shelf supports that we needed to assemble the shelves to start putting stuff away. We were quite emotional over the discovery.

4. I got called up for jury duty this week. I was really hoping to get to serve, as I've always wanted to serve on a jury. (Plus a quiet day sitting while the kids play at Their Majesties'.) And I lucked out and had never even met the judge or the prosecutor. However, the defendant (representing himself) quite definitely did not want any lawyers or police officers on the jury, so I got stricken on the first strike. And had to come home and do the dishes instead of finding out how he was going to defend against the charge of Refusing to Give Name.

I was also very, very lucky as I completely forgot about it until 8:45 Monday morning, but when I called in my group had not been called for that day. I didn't actually get called up until Wednesday.

5. DOB has figured out the feasible solution to our daily morning crisis: snacks. Duh. I'm just not a snack person. Thinking about food three times a day is way more than enough. However, having something for everyone to munch on whenever they happen to awake does make things more mellow until a real breakfast can be served. And provides a convenient way to clean out the fridge.

I still wouldn't say no to the well-staffed country estate, though.

6. I have Three Big Things I want to do before school starts: Organize the basement (hah!); finish painting the trim, and wash the windows. I've given up on starting a fall garden--first I have to figure out what to do about the rabbits. I have made a beautiful, shiny chore schedule and school schedule which I haven't yet given up on.

7. Duchess and Deux are thrilled that I have reached enough terms with the ambient mess levels to tolerate them getting out Clue: Master Detective again. I have no idea what they are doing with it, but I'm pretty sure it bears no resemblance to the actual rules. It may simply be a lengthy game of living-in-a country-estate with lots of murder weapons. It keeps them busy for hours, though.

One of the key elements of our homeschooling approach is called narration: basically at the end of every significant reading, the kids are expected to tell back what we just read about. It's not answering questions, it's them organizing in their own mind what just happened and making it part of themselves. It's very simple to implement and amazingly effective. (In fact, I do well to use it more myself.)

Over the summer the only formal reading we do this way has been Bible stories, but the Duchess and Deux have gotten quite good at it, showing good understanding and retention. The twins are not required to narrate, but Dash is such a born storyteller that he occasionally begs for his own turn. This is what comes out. The story was Joseph and his brothers:

Dash: So Jesus went looking for God . . .
(Five minute interruption during which the big kids dissolve in laughter, Dash takes mortal offense and refuses to speak, and QOC tries to shut up the big kids without laughing herself and reassure Dash that we are all ready to listen eagerly.)
Dash: So Jesus went looking for God, and they lived in a big castle. Was it a castle?
QOC: Um . . . I suppose it could be.
Dash: Or maybe a palace. Yeah, it was a palace. So they lived in a big palace, and there were numbers on all the trees.

(I can only guess that it got mixed up with the plot of their Spanish videos, along with the preschool convention that all Bible stories are about Jesus and God.)
Posted by Queen of Carrots at 3:54 PM No comments:

People like to scare the parents of two-year-olds by telling them that three-year-olds are worse.

However, they feel right. Because a two-year-old has the advantage of still looking like a baby. An amazingly big and mature and capable baby. One that can walk--at least a little ways--and communicate--however basically. When they still act like a baby, you are not surprised. When they act a little more grown-up, you are thrilled.

A three-year-old has longer arms and legs and dirtier feet and firmer lines. A three-year-old looks like a child. A very small and helpless child. And instead of being amazed at how far you have come, you start wondering why you aren't any farther.

You stop being thrilled they went on the potty and start wondering why they can't make it through a church service without three trips (in the case of twins, each). You ditch your strollers and diaper bags and then wish you hadn't. You think you can skip naptime and find out you can't. You forget that you can't actually understand that three-paragraph discourse unless you stop to listen and then you get a why-don't-you-understand-me tantrum.

Three is not so bad, if you don't buy too heavily into your own propaganda that they are big kids now.
Posted by Queen of Carrots at 3:45 PM 2 comments: