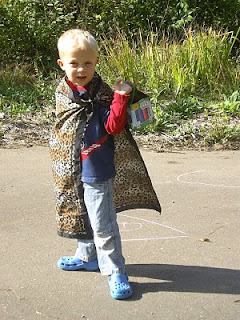 Someone turned five today, at 8:30 this morning Pacific time, as we discussed in some detail, since it was 11:30 and Eastern time where he was born. Someone likes discussing time zones and looking at maps. And listening to stories. And reading stories. And coloring elaborate abstract designs.

Someone likes to pretend to be a small, cuddly version of a large, ferocious predator. Or dressing up as a hero of old. Someone is so busy inside his own head that it's hard to guess what's really going on in there.

Someone has a whole world that lives inside his stomach. Maybe that's why there's not always room for much dinner. But he still likes cooking meals and eating them. Or at least talking about eating them.

Someone doesn't fit the "typical little boy" profile at all, but is very, very happy being himself. And we're very, very happy to have had him with us for the past five years.
Posted by Queen of Carrots at 4:07 PM 4 comments:

So we've decided to sell our current van to eliminate the car payment. We'll be driving Their Majesty's old van instead. This, although it doesn't sound very simple, is much more complicated than it sounds--first, because DOB now uses hand controls to drive upright vehicles, and second, because a day or two after we decided to do this, I backed into my grandpa's old Dodge truck. (I don't know if the truck was damaged--it was hard to tell. But the van's bumper was done for.)

Step one, then, was taking both vans into the shop to get the hand controls switched. Not just any shop does this, of course--and the place we go to have it done is on the far side of Seattle, an hour and a half north if you're lucky about traffic. We originally chose this particular place--they are all pretty far away--because it is close to some good friends of ours. Unfortunately, their kids were getting over something involving vomiting, and our kids were getting over something involving coughing, sore throats, and mysterious rashes, and an exchange of germs seemed ill-advised. So we missed out on the hoped-for visit.

Wondergirl kindly agreed to help out with the driving, though, and we set out with the ducklings parceled out among us to allow both of us to use the carpool lane. I had hoped that stuffing breakfast in their hands (french toast and dried fruit in little baggies) as I buckled them in would make for a quiet ride up, but D3 decided to scream for the first twenty minutes, "I don't want you to drive!" This is going to be a long day, I thought. But after awhile D4 and I started chatting about the fascinating sights of the interstate and she quieted down to eavesdrop.

After the controls were removed from the first vehicle, we were free to go and found a couple of parks to explore and eat lunch at, which more than satisfied the ducklings as to the value of the expedition. On the way back to the shop, we spotted a pair of thrift stores and at Wondergirl's suggestion I seized the opportunity to take the big kids in to try on tennis shoes without having to occupy the twins at the same time.

I figured to time returning right at nap time. (Wondergirl waited for the second car and returned at her leisure, after braving the germs at our friends' house.) Understand that on our usual 10-minute drives back from town right before or after lunch, it is a heroic undertaking to keep D4 from falling soundly asleep, whereupon he wakes up when we arrive and never takes any more nap. But though I played soft music and spoke to no one, and though everyone else fell soundly asleep, D4 remained alert and chatty all two hours home.

At our usual exit there is an intersection that backs up severely in the late afternoon. I figured to avoid it, as is our usual custom, by getting off at the exit before and going around. Which I did--I got off at the exit, went around the roundabout, and got right back on the highway. It had been a long day.

We got home with everyone tired and cranky and I tried pulling out my latest secret weapon in the maternal arsenal: back rubs. I've been teaching them all how to massage each others' backs, and even the twins like to join in, tiny fists pounding. While it didn't make for perfect harmony (mostly on the question of whose turn it was be rubbed or rub), it was a lot better to have consensual pounding on backs instead of antagonistic pounding on heads.

Yesterday we did the only slightly less onerous undertaking of emptying the car of the landfill's worth of detritus that accumulates after about three minutes of buckling in kids. And we took it to a much closer shop to get the bumper replaced.
Posted by Queen of Carrots at 3:42 PM 2 comments:

1. If you want the weather to warm back up, just complete the seasonal clothing switch.

2. If you allow a young boy to choose his own clothes, with or without the assistance of his father, the results will be as follows:
a. If the day's plans are staying at home or playing in the mud with his cousins, the clothing selected will be a nice sweater and a pair of corduroy slacks.
b. If the day's plans are church or going to town, the clothing selected will be a pair of ripped jeans and an old hoodie.
Posted by Queen of Carrots at 2:09 PM 4 comments:

Comes Round the Year

It's one of those times when I get nostalgic and read back through the posts from a year ago, two years ago, three years ago . . . Goodness, there's a lot more history than there used to be. I really should learn how to do a more manageable archive.

Somehow--the revolution of the earth around the sun likely being responsible--the duchy has arrived at seven years of existence. A result that has often been in some doubt, not because we might set off without each other, but because we might just drop dead from exhaustion simultaneously.

Rereading old posts, I wonder how I manage to sound so chipper and sure of myself. I don't have as much momentum as I used to, and I definitely don't know as much as I used to. Sometimes I feel like trolling my old posts. Life's a lot tougher than you think it is, youngster.

And yet . . . it's worth it, too. There's four wonderful people in the world who wouldn't exist apart from us. (It's hard for me to feel like I can take credit for that. . . I mean, it's not like we were really working at it . . . but we've at least done our best with the follow-through.) We've stuck it out through difficulties that have done in many other relationships--and grown closer through them. We still have someone to talk to and laugh with.

Maybe we know less, but maybe it's that less of what isn't so. Maybe we have less starry-eyed optimism, but we have more real experience to count on.

Marriage isn't safe or easy, but it's good.
Posted by Queen of Carrots at 4:48 PM 2 comments:

Email ThisBlogThis!Share to TwitterShare to FacebookShare to Pinterest
Labels: life

QOC: That's because you have a cold.

QOC: No, you're sick. Your nose is running, your neck hurts. You are sick.

QOC: No, sick is not the same word as six.